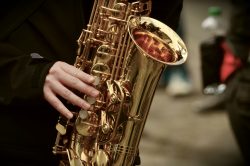 Thank you to everyone who joined us for this event. We hope you enjoyed the evening as much as we did!

Makura Tomoana: is an acoustic and electric bass player known for his versatility and knowledge. He has played with and studied under many of Wellington’s top musicians including Roger Fox, Paul Dyne, Sam Manzanza and Myele Manzanza to name a few. Makura has also had the pleasure of playing alongside many international acts with his original band Tunes of I; Names which include The Original Wailers, UB40, Australia’s Sticky Fingers and Ocean Alley.

Joshua Simon is Saxophonist and band leader based in Wellington. He started playing Saxophone when he was 12, and fell in love with Jazz after listening to Sonny Rollin’s album ‘Saxophone Colossus’. Josh studied Jazz Performance at the New Zealand School of Music. As well as Jazz, he has a keen interest in Afro-Cuban and Balkan music. Josh has played with a number of ensembles, including The Neo Hot Jive Orchestra, Garage Latino, Bazurka as well as his own projects (Oy Azoy, Los Barrettos).

Dexter Stanley-Tauvao is a fresh face on the Wellington jazz scene but is rapidly making a name for himself. In 2015 he toured internationally with the Opeloge Ah Sam Quintet (Auckland), and recently has worked with visiting American jazz heavyweights such as Dick Oatts, Scott Wendholt, Alex Sipiagin and Chris Cain. He tours nationally and performs locally with groups such as Bohemian Thought and the Magnificents, the Lauren Nottingham/Mark Donlon Project, the Mark Donlon Quartet, Tom LaHatte and his Jazz Bandits and the Brass Bandits. In the past he has played with the 2015 New Zealand Youth Jazz Orchestra, the 2015/16 Wellington Youth Jazz Orchestras, Rodger Fox’s NZSM Big Band One and others.

Ruth Armishaw is a chameleon of the Wellington music scene, you could easily see her singing and playing jazz in a restaurant on Thursday, singing Brazilian Samba in a bar on Friday, on stage at the Saint James’ in an opera on Saturday, and singing as a soloist for a choral oratorio concert Sunday afternoon. With a particular love for South American music, Ruth sings with Wellington’s Brazilian diva Alda Rezende in her band Samba Society, and performs as a guest in other Latin bands periodically.