Gabrielle Stevenson is a costumer with more than 20 years experience in the film industry. 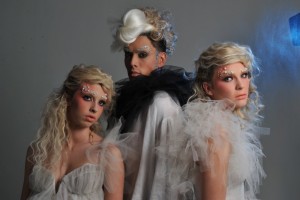 After studying, living and working in London for 8 years Gaby settled in Wellington where she pursued a career in costume and found it fitted like a glove.

She worked as a costume standby on Separation City, Home by Christmas and Predicament before being offered her first design job on Reservoir Hill which won Digital Emmy for Best Teen Drama. Reservoir Hill 2 transpired and then the Hobbit came calling, during which she was asked to head the wardrobe department on The Cure, a bio disaster film which has since acquired distribution in Germany, Spain and Russia.

The producers of Reservoir Hill asked her to collaborate once again with the television show Girl vs Boy (PDF, 1MB) which has now moved into its second season. Between all this Gabrielle has kept herself busy in the commercial industry working with local photographers and advertising agencies and fine tuning her skills on low budget, high energy short and feature films, produced by local film makers.

Teaching has always been on Gabrielle’s radar and is a natural progression for her.

Heading costume departments on locally produced and under resourced films and television shows, has given Gaby the experience vital to teaching. Often on smaller budget feature films the designer’s role is stretched to having to be creative in a more practical sense, using resources that rely on relationships built up over the years and taking on  more responsibilities than if you were working on a block buster. As a result Gabrielle has an appreciation of the skills needed to succeed in the industry.

Tutoring at the NZ film school cemented her desire to share her knowledge and help fill the gap in tertiary education for those wanting to pursue a career in costuming for television and film.