Mike Ashton is an accomplished and very experienced trombonist and trumpeter. He is highly regarded in the NZ concert band and brass band communities. Mike is available to teach the following Brass instruments.
Trumpet
Trombone
Please select the one you want to learn when you complete the online enrolment form below. 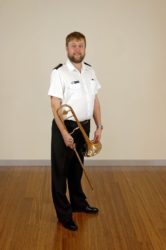 Originally from the UK, Mike studied trombone at the Birmingham Conservatoire under Philip Harrison from the City of Birmingham Symphony Orchestra. Whilst studying, he was selected as principal trombone of the National Youth Wind Orchestra of Great Britain and upon graduating joined the Band of the Coldstream Guards as co-principal trombone. During this time, he performed at many high profile events including the BBC Proms and Live 8 in Hyde Park, ceremonial occasions such as the Changing of the Guard at Buckingham Palace and Trooping the Colour, and extensive tours through Europe, the USA, Japan and Australia. In 2009 the band recorded the platinum selling album “Heroes” which went on to be nominated for a Classical Brit award.

Mike moved to New Zealand in 2010 to take up the position of Principal Trombone for the Royal New Zealand Navy. Highlights included recording the official 2016 NZ olympic song with Hollie Smith and tours of Samoa, Tonga, South Korea and Australia. During his time in Auckland, he also performed with the Auckland Philharmonia and its associated trombone choir “Aucktet”,  the Rodger Fox Big Band, the Auckland Jazz Orchestra, Dalewool brass and the 2014 National Band of New Zealand on their tour of China.

He is an enthusiastic conductor and educator, having held the position of Musical Director for the North Shore Concert Band and running workshops with a number of community and school groups. In 2016, Mike relocated to Wellington and has continued to be in demand as a performer and teacher.