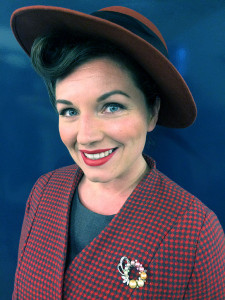 Now a chameleon of the Wellington music scene, you could easily see her singing and playing jazz in a restaurant on Thursday, singing Brazilian Samba in a bar on Friday, on stage at the Saint James’ in an opera on Saturday, and singing as a soloist for a choral oratorio concert Sunday afternoon. Notably, she has been a member of NZ Opera’s Wellington chorus since 2002, performing in 25 operas for the company, as well as operas and choral works in the NZ International Arts Festivals. She has been involved in several NZ Fringe festivals as performer, musical director, composer and producer, and in 2012 debuted her first musical theatre piece, Have Voice; Will Sing. After graduating, Ruth toured in the United States with an international vocal quintet, performing and taking workshops at schools sharing musical aspects of their five cultures. With a particular love for South American music, Ruth sings with Wellington’s Brazilian diva Alda Rezende in her band Samba Society, and performs as a guest in other Latin bands periodically.

Ruth is excited to join the team at Rata School of Music to bring her exuberant energy and zest for singing to her new students.