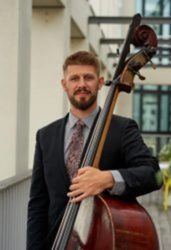 Lachlan Radford is a freelance double bassist and teacher in Wellington. He completed his Bachelor of Music with first class honours in performance at Auckland University and in 2010 with the help of The Elman Poole Music Fellowship he was able to accept a ten month position with Southbank Sinfonia in London where he was based until 2019. Lachlan held the position of Double Bass Professor at the Junior Guildhall School of Music & Drama from 2011 until 2018 where he taught a diverse pool of students ranging from beginner to Diploma standard. Lachlan’s enthusiasm for passing on his musical experience to a younger generation is helped by his diverse and genre-defying background and an ethos to always learn & co-operate with the musicians that surround him. He is also comfortable teaching bass guitar and cello.

Within his classical career Lachlan has worked with several world-class orchestras, trialling for Principal and Tutti positions with the BBC Concert Orchestra, BBC National Orchestra of Wales, BBC Philharmonic, and the Royal Philharmonic Orchestra as well as extra work with the Auckland Philharmonia Orchestra and the New Zealand Symphony Orchestra. As a member of the Berkeley Ensemble from 2013 – 2018 he has also performed and recorded regularly in chamber ensemble and solo environments.

Outside of the classical world Lachlan can be found working in other genres, most often with his trio More Like Trees who blend a fusion of flamenco and drum’n’bass on acoustic instruments. Their second album is due for release in 2019. He has also performed and recorded with award-winning artists such as Heritage Orchestra, DJ Yoda, Reeps One, Lazy Habits, and MC Tali.