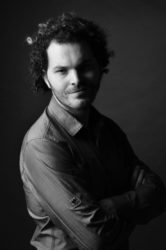 Simon Eastwood is a composer and bass player from Wellington. He has completed a MMus in Composition with distinction from the Royal Academy of Music in London, and also a BMus in Performance Double Bass and Composition from the New Zealand School of Music. Simon has a broad range of teaching experience, having taught double bass, bass guitar, composition, and musicianship privately for almost 15 years, and has worked with students from a range of ages and backgrounds. During his time at the Royal Academy he also completed a LRAM teaching diploma for composition, working with Junior Academy students. He is currently pursuing a Doctor of Musical Arts at Victoria University of Wellington.
As a bass player he regularly performs in a variety of contexts, playing in orchestras and chamber ensembles as well as rock, jazz and folk groups. As a composer, Simon has had works performed extensively around New Zealand, in the UK, Austria, Estonia, Romania, Bulgaria,Turkey, Lithuania, and Korea, as well as in the United States. Education is an important aspect of Simon’s musical life, and he often combines this interest with his composing practice. In 2018 he was commission to write Infinity Mirror for Arohanui Strings together with Orchestra Wellington.
As a teacher Simon draws on a number of teaching philosophies, particularly Paul Harris’ concept of ‘simultaneous learning’, with each lesson tailored to the individual students’ needs. Having performed and written music for a variety of contexts, he understands that there isn’t just one way to make music and believes in a holistic approach emphasising music as a communal activity. Formal elements like sight-reading, analysis and technique are taught in combination with improvisation, aural skills, and musicianship, providing providing a nuanced appreciation of musical style while also building fundamental skills which create a well-rounded musician.